“I am happy to learn that the cause of freedom is doing so well, that God has heard the prayers of his people.” William Wells Brown, “The Colored People of Canada,” 1861. 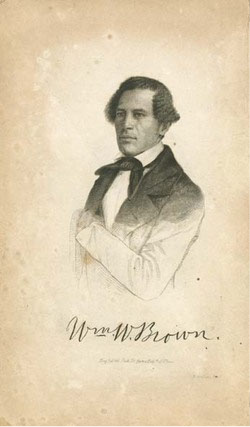 William Wells Brown–former slave, writer, abolitionist, and underground railroad activist– visited London, Canada West, in 1861.  Like many American abolitionists who toured black settlements in Canada West (Ontario), Brown sought to describe the social, political, and cultural lives of African Canadians living in freedom.  By the time he filed his report on  “The Colored People of Canada”  in the pages of the Pine and Palm–a newspaper that encouraged black emigration to Haiti– Brown was, as the editors of the Black Abolitionist Papers argue, ambivalent on whether or not Canadian emigration had lived up to its promise. “No section of the American continent,” Brown wrote, “has been watched with so much interest both by the oppressor, the oppressed, and the friends of freedom and civilization, as the Canadas.” Brown’s account provides us with insight on London’s black community, noting both the sense of freedom here, and the persistence of racial oppression. The essay that follows explores Brown’s personal history and his observations on the  “promised land” of London, Canada West.

William Wells Brown was a black abolitionist who fought his way out of oppression and slavery in the American south. He notes that the narrative that “Canada has been… eulogized as the only spot in North America where the Southern Bondsman can stand a freeman” is not entirely true.[1] Many African-American slaves who escaped slavery had hopes of reaching Canada; this was a place that they believed could be the ‘promised land.’ If a fugitive black slave could escape the bondage of slavery–reach the Canadian border–he or she could have freedom and a chance of equality. Through Brown’s personal accounts and experiences, we can see that blacks experienced similar prejudice and hatred in Canada as well. Thus, through the analysis of William Wells Browns’ history in London, we can begin to unfold the truth about the experiences of countless black slaves who sought a new life, free of persecution and subjugation.

Brown was born into slavery and raised in Lexington, Kentucky. Though he had a white father, he, as well as his siblings, at an early age were forced to work in hard labour conditions as slaves. Brown endured many hardships in his early life. These said hardships motivated Brown to escape slavery and to help liberate other black slaves who sought to travel to the safety of southern Canada. He writes:

An American citizen was fleeing from a Democratic, Republican, Christian government, to receive protection under the monarchy of Great Britain. While the people of the United States boast of their freedom, they at the same time keep three millions of their own citizens in chains; and while I am seated here in sight of Bunker Hill Monument, writing this narrative, I am a slave, and no law, not even in Massachusetts, can protect me from the hands of the slaveholder![2]

In 1834, Brown escaped slavery and became an abolitionist speaker, travelling extensively in the US and Canada, and helping others to freedom.  In doing so, his fame both echoed in the hearts of countless African American slaves who dreamt of freedom, as well as in many white communities who instead perceived men like Brown as a threat.

The Black Abolitionist Papers, an edited collection of primary print sources written by black abolitionists across the Atlantic world, includes Brown’s account of his travels through black settlements in Canada on the eve of the American Civil War. Brown discusses the different cities he visited, the people he came across, and the general feelings about black communities across Canada. Brown identifies that many fugitive slaves, including himself, believed the notion that Canada maintained a reputation of a homeland of freedom and equality for all people. However, his experience and testimony present a different picture.

Before his escape and lengthy endeavour from slavery into Canada, Brown notes:

The anxiety to be a freeman would not let me rest day or night. I would think of the northern cities that I had heard so much about;–of Canada, where so many of my acquaintances had found refuge. I would dream at night that I was in Canada, a freeman, and on waking in the morning, weep to find myself so sadly mistaken.[3]

Brown, in his writings, discusses his experiences in a number of towns and cities across southern Ontario—including London. He mentions that life in southern Canada was overall better, noting that nothing is comparable to that of the slave life in the Southern American states, however, he had still found many problems and inequalities within Canada and more specifically London.

Brown states that “although a residence in Canada is infinitely preferable to slavery in America, yet the climate of that country is uncongenial to the constitutions of the Negroes…[,] their lack of education is an almost insuperable barrier to their social progress.”[4] Brown says that the London Black community, consisting of 500 to 700 individuals, had “two churches, two Sabbath schools and one benevolent society.”[5]

Despite what he and many other black individuals who travelled to Canada for a better life had believed, blacks experienced great hardship and obstacles. Brown explains that he felt as though London locals exemplified greater prejudice and hatred than any other city he visited. In London, many white individuals wanted a level of separation between white and black communities.

London’s white community largely voiced that they did not want to work, live, eat and study amongst black people. Whites would refuse to work with or sometimes employ blacks. Many black men were forced into low paying jobs. Brown describes a talented carpenter living in London that could not find work in his trade and was forced to use a “whitewash bucket and brush” and an unskilled painter.[6] Brown draws a similarity between white slave owners in the south and locals from London using racial slurs, such as “crow crow,” as a black individual would walk by on the street. This demonstrates a level of racism ingrained in the London community, and that racism against blacks was an everyday occurrence even in Canada.

As the black community in London grew, the white community protested black student enrollment at white “community” schools. White families, as described in an editorial in London’s Free Press, felt that the enrollment of black children in schools with white children was “unnatural,” would lead to intermarriage, and would thus be a “blight” on white society.[7] The Free Press released many articles urging the white community to not allow black enrollment within London’s school.

Brown’s explanation of the origins of hatred and distrust from London’s white community is represented by two major points. Due to hard feelings and a history of subjugation, London’s black community had resorted to creating its own sub-community within London, comprised of its own churches and infrastructure. As well, the black community’s departure from the greater London community, including the fact that many black men took on “menial offices of labour,” resulted in “whites… regard[ing] them with a degree of inferiority.”[8]  Moreover, a large part of London’s community comprised of low class, impoverished individuals who originated from England, Scotland and Ireland. In order “to draw attention from their own couthness,” said community tried to “[direct] the public eye to the other degraded class”—namely the black population living in London.[9] As a result, the black community was even more polarized and they immensely isolated themselves from the greater London community.

However, there were upsides to living in London. An individual’s wealth, despite being of African descent, provided great social upwards mobility and respect. Brown describes a story of a wealthy black merchant who moved from New Orleans to London. As he deposited a great sum of money in a local bank, he automatically labelled himself as an individual of means. Though respect from London locals was not genuine, a real-estate agent who was openly racist sought to befriend the wealthy black merchant in order to receive his business. The black merchant was respected only because of his pocket-book. Despite the grim tale, Brown notes that “there are many of our race who own good farms and carry them on in the best manner;” some of which have “sixty acres in a high state of cultivation… a well finished house” and are “without a single debt.”[10]

Brown brings forth the existing dichotomy of how London locals perceived themselves and how they treated the black community. London was not a “liberal” society, as Brown notes it was considered, but it was one of subjugation, with strong sociopolitical racial underpinnings. There was room for upward mobility for black individuals of means, but Canada—and London, specifically—was not truly the vision of equality that so many black fugitive slaves hoped it would be. Even the wealthiest member of the black community would still be referred to as a “wealthy nigger,” proof of the evident subjugation of the black community in London.[11] Despite the various examples of the hardships that the black community faced in London, Brown strongly puts forward the notion that life in London was of a higher quality than life in slavery. London’s society was not perfect, but it provided the opportunity for some black individuals to live fruitful and meaningful lives.

In researching the life of William Wells Brown, the group found it challenging to find reputable sources about his story in London. It is important to question why the history of the black abolition movement in London is so limited. Samuel Ringgold Ward writes that the perception that Canada was a “great moral lighthouse for black people on the continent” was true in one sense, but in more recent times, some argue that the perception of being the “last stop on the underground railroad” has been accepted uncritically by the Canadian public trying to anxiously hold onto a treasured national narrative.[12] One can draw from this conclusion that a lack of documentation on the lives of active and vocal abolitionist figures, such as William Wells Brown, is in part a product of Canadians feeling uncomfortable with the besmirching of Canada’s reputation. Unfortunately, this narrative has “obscured” the history. The proverbial torch is only carried by a select few.[13]

The lack of information on William Wells Brown thus provides some possible insight on this larger problem. Along the lines of the aforementioned statements, perhaps London’s history as a place of freedom and a place not immune to racial prejudice has not been fully explored or recorded. Thus, as historians, we must try and salvage the bits that we have, and recreate the context in which the amazing history of William Wells Brown—an individual who faced hardship and persevered—connects to London’s anti-slavery past.

Reid-Maroney, Nina. 2014. “History, Historiography, and Promised Land Project.” In The Promised Land: History and Historiogrpahy of the Black Experience in Chatham-Kent’s Settlements and Beyond, by Nina Reid-Maroney, and Handel Kashope Wright eds. Boulou de B’beri, 62-69. Toronto: The University of Toronto Press.