The Canada Mission was an operation of the American Missionary Association  put in place to allow fugitive slaves to settle and re-claim their lives after years of bondage and oppression. Slaves would escape from captivity in the U.S, and navigate the Underground Railroad, arriving in Canada, with the hopes that they could resettle.   Free people of colour also emigrated to Canada in response to racial prejudice and the eroding of civil rights in many “free” states.  Black communities  were generally located in Southwestern Ontario near the Canadian-American border, the two most prominent, well-known operations being the Dawn Settlement founded in 1842, located in Dresden, Ontario, and the Elgin Settlement, founded in 1848, located in Buxton, Ontario. Josiah Henson, the inspiration for the globally acclaimed novel: Uncle Tom’s Cabin by Harriet Beecher Stowe, founded the Dresden Settlement, while the Elgin or Buxton settlement was founded by Rev. William King, and George Brown.  The Dawn Settlement was supported by the AMA through its agent, the lane rebel and Oberlin graduate, Rev’d. Hiram Wilson.

These communities granted fugitives with land, work (agricultural and training), clothing, food, and many other basic necessities until these people were able to independently support themselves. The Dawn Settlement additionally included a school, known as the British-American Institute, also founded by Josiah Henson and Wilson. This school, founded in 1849, was meant to grant a general education, as well as teacher training, which would further allow escaped African-Americans to live independent lives, and spread their knowledge and freedom.  The Rev’d. William P. Newman, profiled on our class website, was an important early figure at the BIA and Dawn.

The Canada Mission was supported by a wide variety of people, including many small charities and abolitionist groups from the U.S, as well as organizations in Britain, and even small missions in the Sandwich Islands, now known as Hawaii. The great connection between these organizations was their similarity in religion, the backing of the AMA, and their desire for abolition. Each year, an annual report was sent out by the organization to update the status of the mission. These reports not only include a lengthy list of supplies granted to them through the charities and organizations during the year, but a general update on the buildings erected and worked land, people included in the mission, as well as the successes in converting many slaves to Christianity. At the end of the report, a collection of letters sent by donors and supporters of the mission is presented, giving great insight into the condition of the settlement, and the connection and motivation of the outside community. Much of this report is interwoven with many references to Christianity, seeing God as being the creator and sustainer of the mission.

News was spread not only through the annual report, but also in The Herald of Freedom, a journal produced by the New Hampshire Anti-Slavery Society, in the form of a circular. This allowed access to information on the mission to a wide variety of people, spreading great awareness. It was a general information article, which informed on the condition of the Upper Canada Mission, and British-American Institute, as well as a call for more support. The language used in the update, is very Christian, and assertive, stating ideology, and calling the escaped African-Americans “refugees” rather than slaves. At the end of the first section, the committee for the settlement is listed, including: William P. Newman, a well-known Baptist abolitionist from Ohio. This demonstrates the great links between nations and people in the fight for freedom from bondage in the U.S.

These articles were created, not only to give updates, and call for more support, but also to affirm belief in the African-American people, and their journey to freedom. There is large discussion of the treatment of black slaves, and freedmen by their slaveholders, as well as “ignorant” white people in general. They give insight into the conditions of the present, and how this is being solved with these missions and organizations. 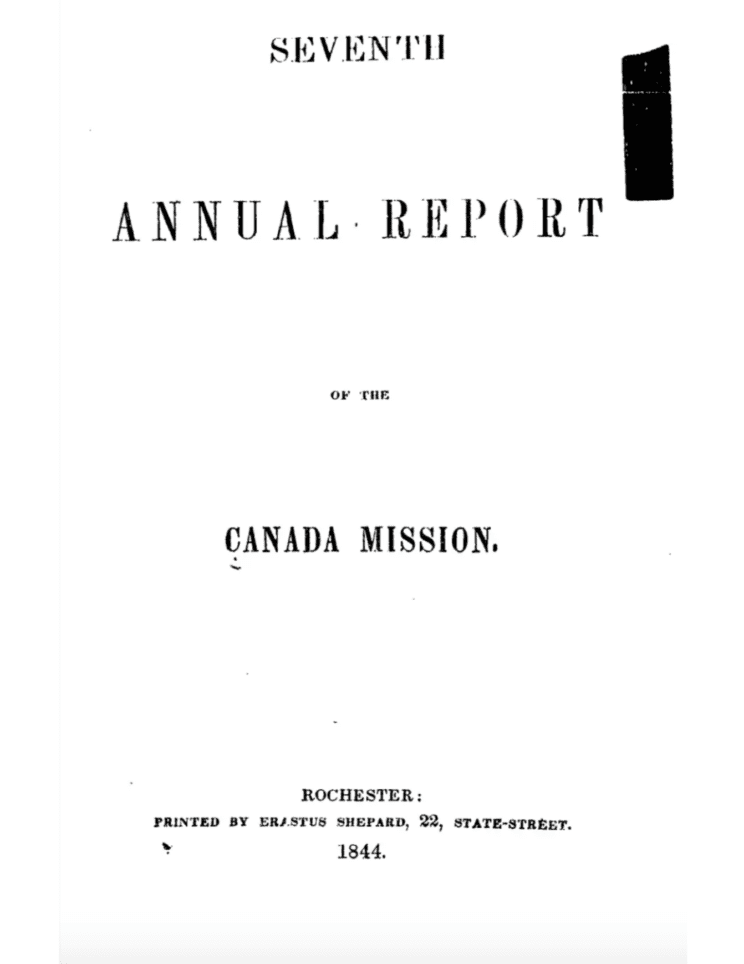 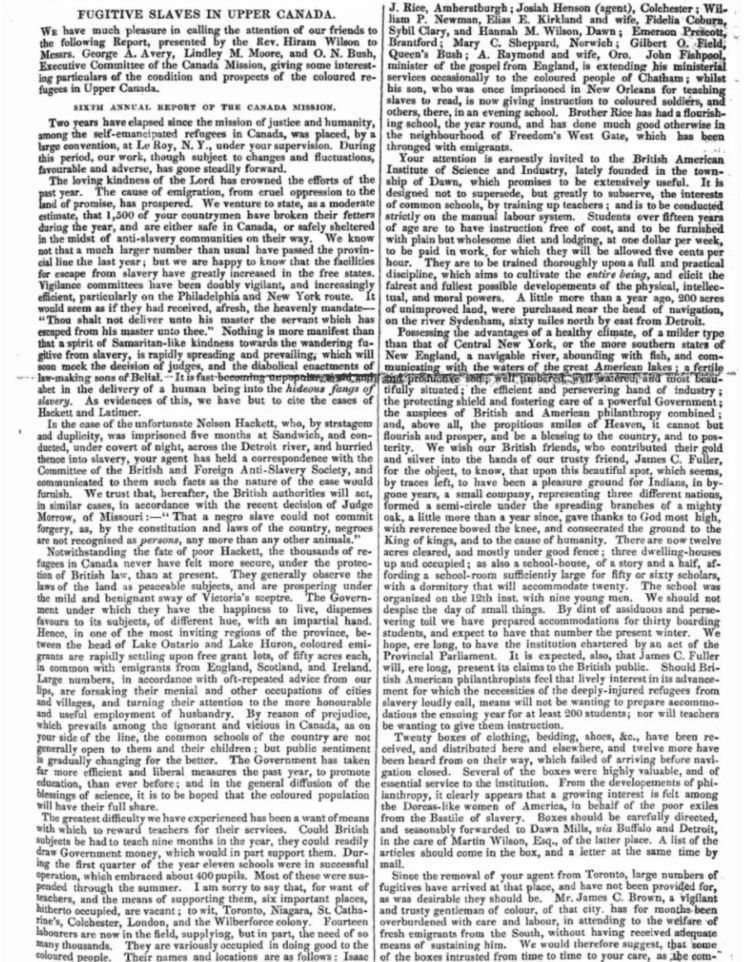 Herald of Freedom – The Canada Mission and the British-American Institute 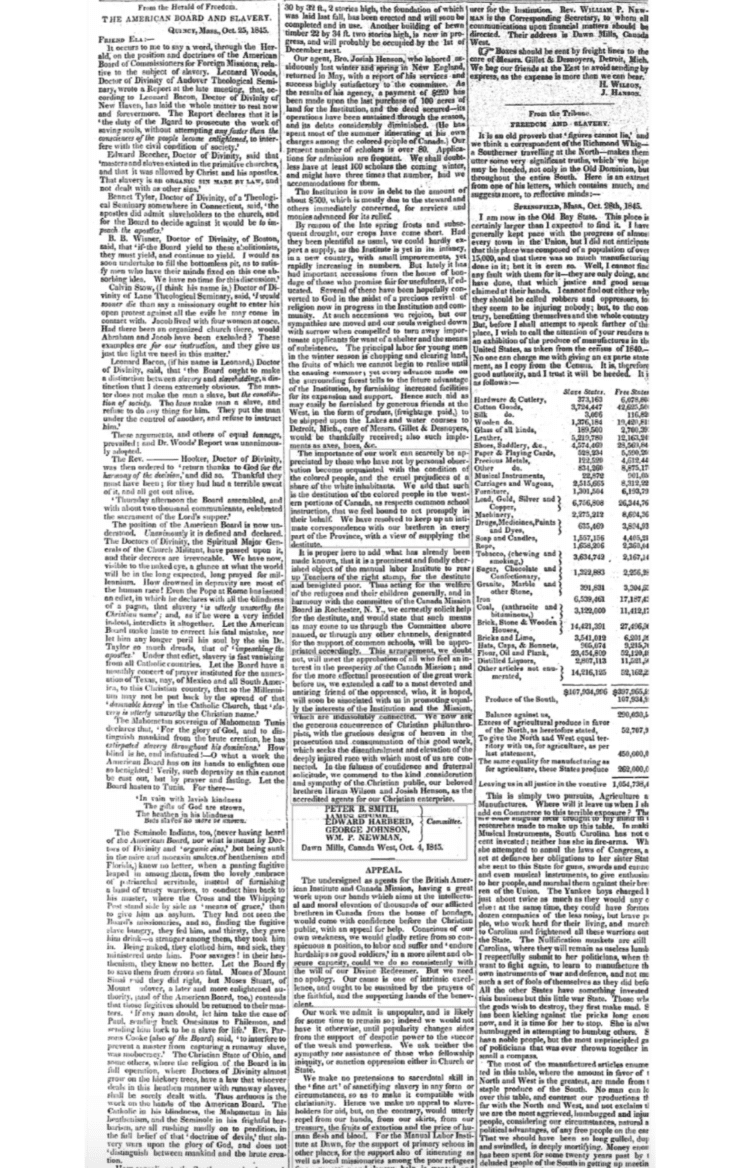 Pease, William H. and Jane Pease. Bound With Them in Chains; A Bibliographical History of the Antislavery Movement. Westport, Conn.: Greenwood Press. 1972.