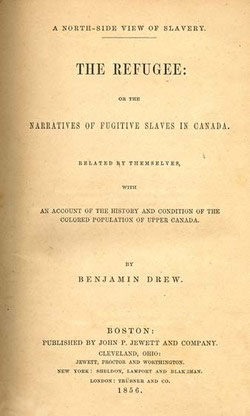 By looking at the works of the American abolitionist Benjamin Drew, we are able to find riveting first hand testimony from black residents of London, Canada West, in the 1850s. Drew traveled throughout Canada West interviewing former slaves. The interviews were published in 1856, in A North Side View of Slavery: The Refugee, or the Narratives of Fugitive Slaves in Canada.  The full text of Drew’s work is available here through the project, Documenting the American South.

Drew’s interviews in London give us detail and insight into day-to-day life, and include material from members of the B.M.E. congregation.  For example, Drew interviewed a man named A. B. Jones, a field hand from Madison, Kentucky, whom at the age of thirty fled to Canada because he heard that men were free there according to his words. Jones was able to find work as soon as he arrived and was able to prosper and place his family “beyond the reach of want.” He goes on to tell Drew that he believes the future in Canada is favourable. In addition, he highlighted the value of integrated education in London: “The colored children and white children are educated together in this place, and I see as fair an advancement in one as in the other.”[1]

Nelson Moss also noted the importance of impartial laws that enabled children to be educated together in public schools, and that made wealth and prosperity possible. He also acknowledged that there was a great deal of prejudice in London, “but not so much as in Pennsylvania”[2].  Henry Morehead, formerly of Kentucky,  talks about a reluctance by blacks within the London community to fully immerse themselves  in what was being offered. “Free school is something unusual to them,” he explains.  “Although they know they are free, they have a kind of timidness about them, so that they cannot mingle with the whites of this country, as they would if they had been free born”[3]. This perspective offers interesting insight on the long shadow of slavery and its legacy.

Overall, Drew’s accounts are invaluable as a form of slave narrative, and for what they reveal about 19th-century London: a place of opportunity for blacks to acquire jobs, property, and a measure of freedom, even though racial prejudice in Canada was a problem.