The abolitionist press played a significant role in abolishing slavery through its persistent advocacy. Risley details the history of the press and articles on key moments in the struggle for abolition. The press really began with Benjamin Lundy, who “recognized that a fiery, outspoken publication could be one of the most important tools” for abolishing slavery.[1] While the press was united by a common purpose, editors had different goals. For example, Freedom’s Journal “advocate[d] for free blacks of the North”[2] while The Liberator advocated for “immediate emancipation.” [3] Many newspapers pushed for access to education and transportation as well.[4] By the 1840s, the abolitionist movement was divided over key questions such as the role of women, the role of violence, and the role of party politics, but remained committed to its original goals.[5] The plethora of abolitionist newspapers in the mid-nineteenth century illustrates the “widely held belief at the time that the press had a significant influence on public opinion.”[6] Although diverse, the press was able to articulate a common cause, leading to the abolition of slavery.

In order to understand the significance of the abolitionist press, it is important to look at some examples. One of the most influential and well-known abolitionist newspapers was The Liberator, published by William Lloyd Garrison. Garrison firmly believed in the “power of the press to disturb the peace of the complacent”, illustrating that the general public had a role to play in the abolitionist movement and that there was no such thing as neutrality in this debate.[7] Brennan’s biography of Garrison reveals that Garrison devoted his life to influencing morality through his press. Garrison began as a printer and then worked for different newspapers, eventually publishing The Liberator beginning in 1831.[8] His first edition contained the infamous line “and I will be heard”, illustrating Garrison’s belief in the power of the press.[9] Garrison’s work was influenced by two nineteenth century press trends. The first was the ‘penny press’, where newspapers were marketed specifically to consumers, a strategy that he rejected.[10] The second was the push for political influence in newspapers through the inclusion of different sections such as editorials. Garrison strongly subscribed to this second trend as he worked to “replace the preacher’s pulpit and the politician’s platform.”[11]

Garrison began his activism through the press during his time as editor of William Collier’s National Philanthropist, beginning in 1828. That newspaper focussed on social reform and had two main causes: women’s political influence, and the importance of education and the press.[12] This experience shaped Garrison’s work fighting for emancipation as a moral cause through the written word. In fact, one of his biggest targets for criticism in his writings was the American Colonization Society, revealing that he also believed in full integration of freed slaves into American society.[13] The Liberator ceased being published in 1865, upon the end of the Civil War and the ratification of the Thirteenth Amendment. Garrison had used the press as his vehicle for bringing about the abolition of slavery.

Another important example is Frederick Douglass’ The North Star, published in Rochester beginning in 1847. Douglass, a former slave, was strongly influenced by Garrison’s work, describing The Liberator as “in [his] heart second only to the Bible.”[14] The North Star’s slogan was “Right is of no Sex – Truth is of no Color – God is the father of us all, and we are all Brethren”, illustrating that Douglass, like Garrison, advocated for full equality.[15] Fee Jr. explores the context of Douglass’ paper and the fate of journalism in the mid-nineteenth century. Similar to Brennan who situates Garrison within the broader journalistic trends, Fee Jr. argues that Douglass’ press was influenced by the “changes in the craft as it moved from political organs of the early century toward an independent press.”[16] Furthermore, the mid-nineteenth century saw increased professionalization of journalism as fellow editors distinguished their own ideas from the broader methods. While many editors disproved of Douglass’ abolitionist stance, they approved of his use of the written word to express his ideas.[17] In fact, the editors viewed their work as a “mutual calling”, articulating that they had a “sense of being part of a larger enterprise – journalism.”[18] This time period saw an increased sentiment amongst editors about their important role in society, thereby enabling journalists such as Douglass to articulate controversial viewpoints. 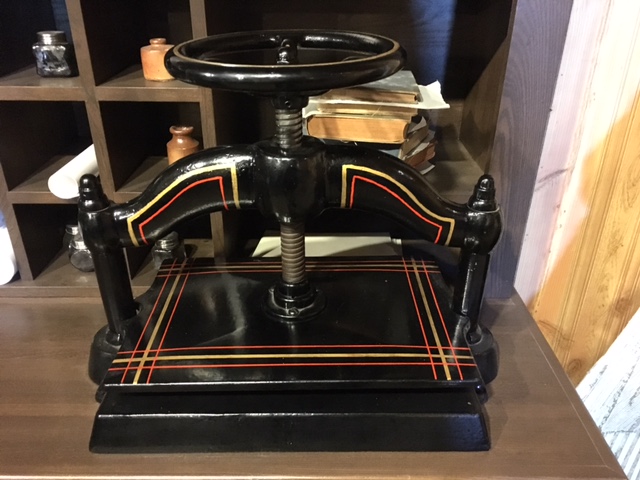 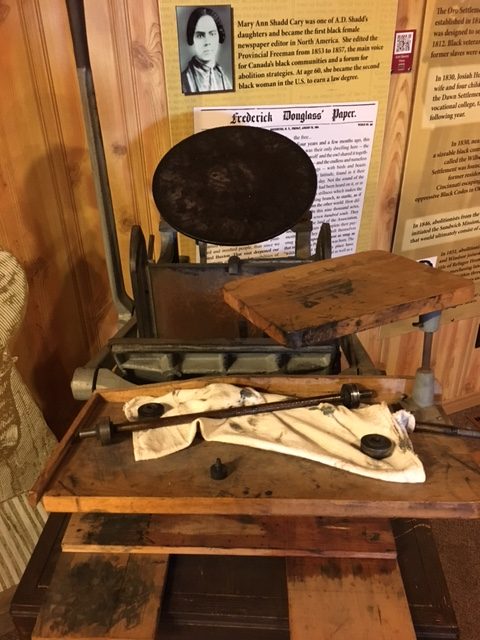 Figure 2 Image of a printing press from a funeral home in Merlin Ontario, depicting what a press would have looked like during the abolitionist movement. This image was taken at the Buxton National Historic Site and Museum.

Connecting the broader discussion of the significance of the abolitionist press to the context of the network in the Great Lakes Region, many of the key members actively used the press. Specifically, the press was used as a tool to coordinate and collaborate. Hiram Wilson’s correspondents published letters and advertisements related to their cause in order to inform and recruit others. For example, in the 41st issue of The Colored American, published on 14 October 1837, Augustus Wattles wrote an advertisement for teachers in ‘colored’ schools (figure 3). Furthermore, he published a letter written by a student about abolitionist debates at the Lane Seminary in The American Anti-Slavery Reporter on 1 May 1834 (figure 4). Wilson’s correspondents are anchored into the larger abolitionist movement in the United States and Canada through their contributions to the press. 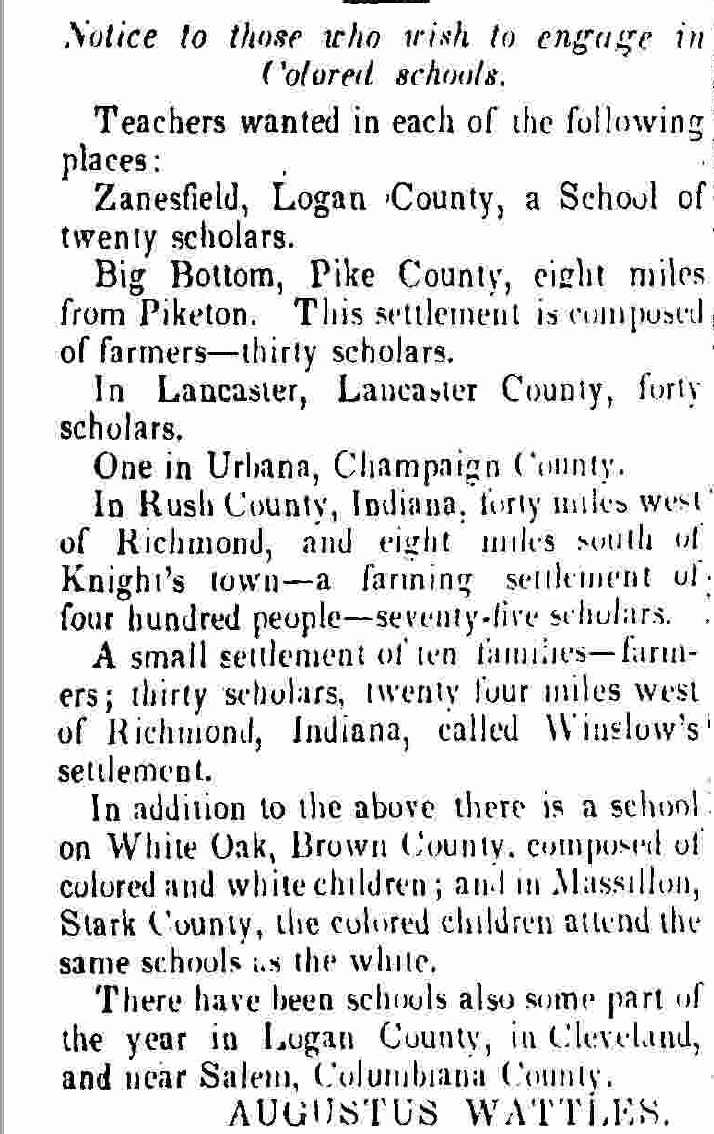 Figure 3 Wattles, Augustus. “Notice to those who wish to engage in Colored schools.” The Colored American (1837). From the Oberlin College Library. 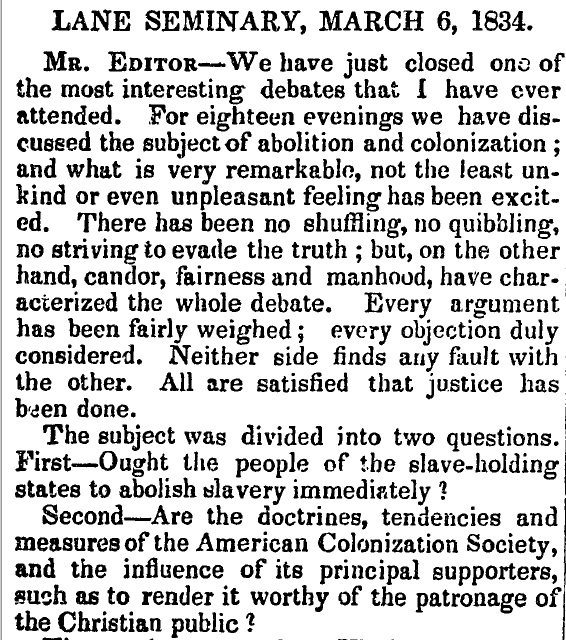 Figure 4 Wattles, Augustus. “We invite public attention to the following letter from a student in the Lane Theological Seminary, recently published in the Western Recorder.” The American Anti-Slavery Reporter (1834). From the Oberlin College Library.

Oberlin College is a focal point in the research on the abolitionist movement in the Great Lakes region and its own press played an important role. Morris details Oberlin’s active leadership in the movement, and one way that this was evident is through its bi-weekly publication The Oberlin Evangelist. The newspaper’s editors responded to important legislation such as the Fugitive Slave Act and advocated courses of action including civil disobedience.[19] The editors were also vocal about political parties, illustrating that the newspaper was influential on a local and national level.[20] Oberlin was particularly radical because it advocated not only for abolitionism, but also for full equality, like Garrison and Douglass. With strong statements such as, “the degradation of the colored man at the north is one of the strongest bulwarks of slavery in the south”, The Oberlin Evangelist put forth effective argumentation for freedom and equality.[21] The Evangelist acted as a key vehicle through which abolitionists at Oberlin could advocate for their cause, leading the western abolitionist movement.

The abolitionist press was also part of the broader movement towards modern notions of freedom of the press. Reynolds discusses William Lloyd Garrison’s and Benjamin Lundy’s criminal libel case in order to illustrate that “the abolitionist movement helped define what constituted free speech” and that freedom is often advanced through attempts at its suppression.[22] Lundy is often considered to be “the pioneer of the abolitionist movement” and he began publication of his newspaper Genius of Universal Emancipation in January 1821.[23] Lundy and Garrison had met in Boston and soon after moved to Baltimore to publish together.[24] In an article published in Lundy’s newspaper on 20 November 1829, Garrison condemned ship owner Francis Todd of Newburyport, Massachusetts for transporting slaves.[25] Garrison depicted those complicit in the system of slavery as “highway robbers and murderers”, a statement for which he was tried and found guilty of criminal libel, while charges against Lundy were dropped.[26]

The status of free speech in the nineteenth century was complicated as the Supreme Court did not issue major rulings until the twentieth century and state courts did not rule in favour of legal protection if the speech “disrupted the social order.”[27] In the case of abolitionist free speech, it is important to judge the impact based on the reaction to it. The ‘Gag Rule’ and mail censorship of the 1830s and 1840s illustrate the fear amongst pro-slavery advocates of the power of free speech, particularly as the number of abolitionist newspapers significantly increased during these decades.[28] In fact, by 1831, there was a division between Northerners and Southerners over the extent of freedom of the press.[29] Every state in the south, except Kentucky, prohibited abolitionist literature by law.[30] There were also riots in the mid-1830s leading to violent results, such as the destruction of The Liberator.[31] Garrison recognized the power of his words, writing a pamphlet from prison in which he argued that “the best weapon against suppression was more speech.”[32] Significantly, the “traditional press of the time joined their cause even when most were opposed to the message.”[33] Similar to Douglass’ experience, most editors defended Garrison’s and Lundy’s right to free speech although they disagreed with their position.