“…heaven bless you & your dear family is the prayer & your most obedient servant G. H. White minister of the gospel London Canada West.” Garland White to Edwin Stanton, Secretary of War, May 7, 1862. White offered his services as a recruiter and volunteer in the Union army. 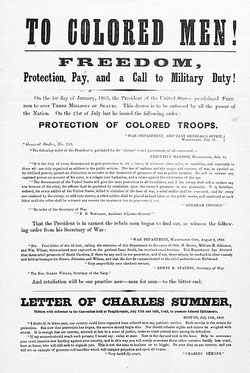 White was a slave in household of Senator Robert Toombs,of Georgia.  Living in Washington during the Congressional session in 1859, White was ordained in the African Methodist Episcopal Church. Shortly afterward, White fled Washington and Toombs, making his way to Chatham, Canada West, and freedom.  He moved to London in 1861, and followed Lewis Chambers as the London BME Church minister.

When the Emancipation Proclamation went into effect, opening the Union army to black volunteers, White wrote to Lincoln’s Secretary of War, Edwin Stanton, offering to raise a company of black soldiers to aid in “the eternal overthrow of the institution of slavery.” White returned to the United States in 1863, and became a chaplain in the 28th United States Colored Infantry.  He described his experiences in letters published in the Christian Recorder, the newspaper of the AME Church.

Biographical information about Garland White can be found here in the Gilder Lehrman Center’s primary source reader on the Civil War. The reader also contains a transcription of White’s letter to Secretary Stanton.