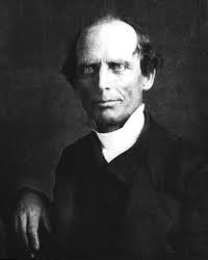 Charles Grandison Finney was born in 1792 in Warren, Connecticut. His family moved to upstate New York when he was two and was raised there. During his adolescent years his family moved to Henderson near Lake Ontario. Finney was very fond of music and dancing and played the cello. This very fondness with music is what lead him to bring this love for music to Oberlin college, and he hired the first music professor in an American university.  He was also learned in some Latin, Greek and Hebrew.

He moved to New York to study law in the office of Benjamin Wright, in Adams New York. According to his memoirs it was in New York that he found his faith, in his memoir he talks about how “he went alone to the woods and knelt by a log and wrestled with God in prayers” after this he was converted. After this divine transformation Finney became enthusiastic and began delivering powerful messages in an area in upstate New York called the ‘burned over’ district. Later on, he released a book called ‘lectures of revivals’ which sold twelve thousand copies and became an instant best seller. Finney was a supporter of the Arminian Doctrine of salvation which states “people chose to accept God in order to go to heaven”.  He also believed that human nature is not in essence sinful but if the truth is displayed to people in a way that they can understand they would chose the righteous way. Finney’s ideals centered on nondiscrimination of gender or race. Finney also issued his lectures on ‘systematic theology’ in two volumes. Finney faced heavy criticism and was clouded with controversy due to his abolitionist stance and his social reform ideals which broke away from the ideas of many churches during the time. Additionally, his views such as the will of man in the process of regeneration and the new revival techniques that he used which were known as ‘New measures’ lead to criticism. Finney’s was known for his preaching style, as he spoke from a pulpit as if he was an attorney trying to convince a jury.

In 1835, he moved to Oberlin to head the theological department. During his time in Oberlin, he also served as the first pastor of the first congregational church and the second president of Oberlin college.

Barnes  sat in on professor Finney’s classes during her summer visits to Oberlin, although she was not enrolled in the college. In her letter she writes of her excitement of meeting professor Finney at a stagecoach to Oberlin from a religious convention in Cleveland.  Finney’s legacy still stands for his immense contribution to the religious movement and the Second Great Awakening that informed 19th-century antislavery work in Upper Canada.