Reverend Isaac Bearfoot was a 19th century native cleric, who in early life was influenced by Abraham Nelles, an Anglican missionary at Six Nations.[1]  He was born an Onondaga; however was a Canienga (Kanien’keha: ka) through adoption.[2] The church provided one avenue for higher education. In the 1870s he was ordained a minister and in 1886-87 he ministered to Wallaceburg and Dresden.

During this time, he also aided the Huron Diocese in their missionary efforts to local First Peoples. Missionaries spoke little or no Kanien’keha: ka and required the assistance of the Indigenous populace to educate them in the use of their language.  Missionaries then used this as a tool to assimilate the Indigenous population.  A key tactic within these efforts was teaching English language through scripture.  He was highly educated and undertook to translate many documents within the church including a collection of hymns and psalms into the Mohawk language.[3]

In these documents, we see how Bearfoot was concerned with Church accounts while posted in Dresden.   Initially presented is a letter addressed to EB Reed discussing the salary owing to Reverend Bearfoot.  The second document is a ledger outlining the church’s financial relationship with Bearfoot during the latter part of 1887.  Taken together, the documents point to broader financial challenges the Anglican Church was experiencing  due to the increasing population and the need to have multiple missionary fronts in Upper Canada.[4]  The church had an outstanding account of $114.33 owing to Reverend Bearfoot.

[3]Isaac Bearfoot, A Collection of Psalms and Hymns in the Mohawk language : For the Use of the Six Nation Indian,(New England Co., 1871). 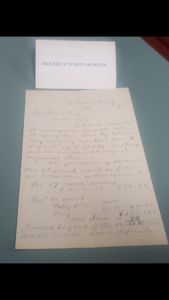 I have made arrangements with the Congregation here by which my salary has been paid in full up to date – so there are no arrears charged against them.

The following shows the stipend acct so far as Dresden is concerned.

I would be glad if the Committee (Transcriber Note: the number 114: is written over this word) would make some definite 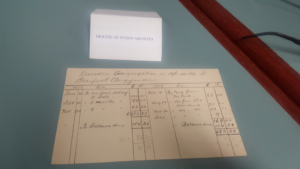 Dresden Congregation in a/c with I. Bearfoot Clergyman