Within the Diocese of Huron Archives we learn of a man named Simpson A. Brigham. Born in 1875, with the birth name of Auhyahkaosa, he was the first Indigenous person from Walpole Island to graduate from Huron College and be ordained an Anglican minister. He would return to Walpole Island in 1899 to minister to the local Anglican Parish. The correspondence that the Huron Archives has about Brigham is written by him and his wife Margaret, and it provides insight on Brigham and the Walpole Island community.1From the letters which topics predominantly deal with money issues, the reader can get a glimpse at the challenges faced by Brigham in the terms of funding for his church.

In a letter from Brigham to the Diocese of Huron he asks for $100 to by a horse, and in another letter to the Lord Bishop he asks for assistance in paying doctors bills and for the authority to start collecting funds to build a parsonage. In Margaret’s letter, which was written after Brigham’s death and after she remarried, we see her discuss Brigham’s will and estate with Rev. W. Doherty in London, Ontario which shows Brigham was broke and had debts. This is not anything unusually as the missionary system would understandably be expansive and Churches and Pastors would need some assistance.

But in a petition we see signs of corruption by Brigham as the community complained about his borrowing of money from parish members and store-keepers and refusing to reimburse them. From the letters we do not know if Brigham was spending the money that he collected through fundraising exclusively on the church. From the petition however we can start to understand the population demographics in the Walpole area at the time. We can see that all the petitioners have English names, we do not know if these are all European settlers or Indigenous converts to Christianity, but what we can begin to understand is that the Anglican Church and the missionary missions had a strong footing in the area. This would explain why Brigham’s services were well attended, between the morning and evening services he conducted he would have well over 150 attendees from a population of less than 500 on the Island.2

To The Incorporated Synod of the Diocese of Huron

Having been appointed Missionary at

Walpole Island, where the keeping of a

application for an outfit grant of

solely towards purchase of a horse

& vehicle necessary for my work all [illegible]

Missionary, & to be given to me on

the further condition that I [under

their] years service in the Diocese.

the Lord Bishop of Huron

You will pardon me if I write to

remind you of the appeal I

have made for special help.

I have doctor bills to pay at once.

Of the fund of which you spoke

be found exhausted then I shall

know it beyond your power

While I am still unable to

begin to collect the money to

build the parsonage on Walpole

Island, I believe I can do a

little by writing to some of my

personal friends for some money,

So will you please send me

the written authority to collect

funds for this object.

Am indeed sorry that in

the Christmas rush, your letter

was neglected. We have just

returned from Detroit where we

spent the holidays with relatives

bringing my sister in law and

four children back here for

more holiday. Jimmie as we

call him is very happy with

his cousins as playmates,

prefer living on the Island. (The

Agent has there a comfortable house

with conveniences) for the sake of

the boys it seems best to try

Port Lambton. We were married

here very informally by a friend

I am enclosing a copy of

Simpson’s will. It was entirely by

accident that we discovered that the

land which this includes and

which was held by Indian

Location Tickets must be

transferred to similar Tickets in

my name before it could be

passed along to Simpson Lewis.

by his farther(who predeceased him

only a few months, and whose

will was not approved by the

had erroneously been considered

by the Indian Department to be

for Simpson’s use during his life.

The former Indian Agent had

never told me all this or

showed me the correspondence –

in fact advised me to leave the

Location Tickets as they were –

although he knew that I had

accepted the responsibility for

all the debts against both

estates, amounting to more than

six hundred dollars. In addition, I have invested on

the Island in the little home

there some eight or nine hundred

dollars. I have also a

way of evergreens for market

(about five thousand of them)

Mr. Highfield was unwilling that

I should risk Jimmie’s losing

left for me and no other heirs

Thank you so much for your

kind wishes. When we can

there is every chance for a long

and happy life for us both. I do

not remember whether I told you

that Mr. Highfield is the Agent

on the Island for the Department, so you see I

in the work there, from a different

point of view. He has there sons

two of whom are away at school,

the youngest will be with us, so

Jimmie will have companionship

while personally we would both 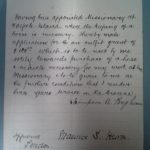 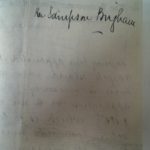 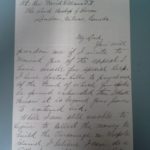 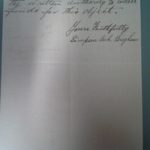 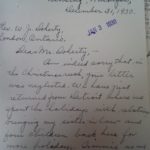 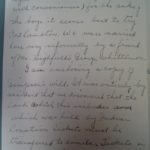 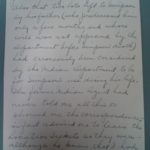 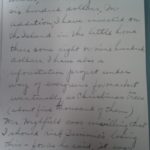 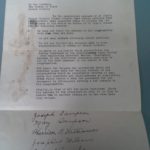 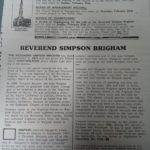