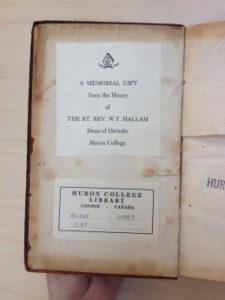 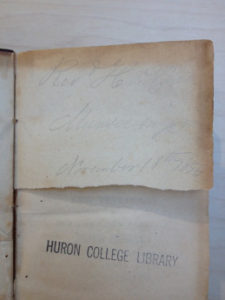 This book is a translation of the New Testament into Anishinaabemowin, the language of the Anishinaabe, or Ojibwa people of Upper Canada. The book was translated by Sherman Hall, an ABCFM missionary. Translations of the New Testament like Hall’s were widely used by Christian missionaries in Indigenous communities. They are often viewed as tools to impose European culture and religion onto Indigenous peoples though they often resulted in a blending of Christian and Indigenous spiritual beliefs. Many Christian narratives and values were understood as similar to belief systems already held by the Ojibwa people. The combination of religious beliefs was part of an ongoing process of spatial, cultural, and political negotiations as European settlers became an increasing presence in the lives of Indigenous Peoples. This book marks an early phase of European settlement around Lake Ontario.

This book is one of several Indigenous language texts in the Huron Rare Books Collection, all of which share in Huron’s historical connection to the Anglican Church’s missionary work in Upper Canada. There is no formal record of this particular book’s history. The name Rev H. P. Chase (Case?) and the date November 18th, 1856 are written in the front page of the book, though it is not clear if this was the same H. P. Chase who was trained at Huron. The book postdates the inscription by twenty years, so there must be another significance to inscribed date. The book was eventually in the possession of The Rt. Rev. Hallam, who was Professor of New Testament and Dean of Divinity at Huron. The book appears to have been donated to Huron from Hallam’s collection. Huron has two editions of Hall’s New Testament dating from 1844 and 1875, showing the enduring popularity of the work. The 1844 edition (also pictured) appears to have been purchased in 1961 and has a more ornate cover, but still does not yield much information.

Much of the history of this book is not known. What information we do know about the text comes from within the book itself, as the Huron Library records do not contain any further information. Both the Huron Library and the Rare Books Collection have moved sites and more detailed records of this text could have been lost. It was published through the American Bible Society in New York. The book could have been used in a church, home, or school setting but it does not contain any notes or significant signs of wear. The text is written entirely in Anishinaabemowin, does not contain any notes or annotations in English and only contains a brief guide to pronunciation. This translation could have been used by missionaries but also could have been exclusively used by Ojibwa readers.