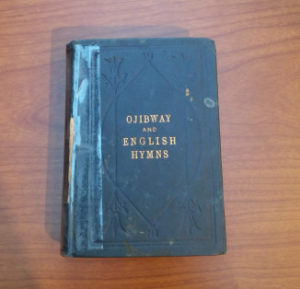 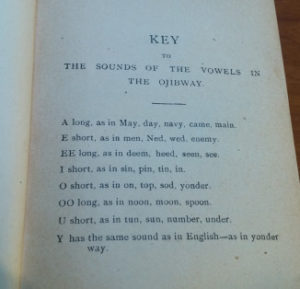 “A Collection of Ojibway and English Hymns” was re-arranged, revised and published by the Reverent John Jacobs, who was Missionary to the Indians of Walpole Island. The book was printed in Sarnia at the office of the Sarnia Canadian on April 1st, 1895. Huron Library’s copy is the third edition, and is printed in both English and Ojibway. The book was written for missionaries, teachers, catechists and Ojibway Indians, to familiarize English speakers with the Ojibway language and Ojibway peoples with Christian hymns.

This hymnbook was used to aid Anglican missionaries, like John Jacobs, in teaching their gospel through hymns and sacraments. Books like these were essential for missionary work, but it was their knowledge of local customs, culture, and language that proved to be vital for their cause. Singing was an important part of indigenous culture, and using bilingual hymnals made participation in Christian services s easier for children and those who could not speak English, and encouraged them to learn it.

Hymnals such as these also proved very useful in teaching Anglican missionaries how to speak Ojibway. However, historians have found that translations from English to Ojibway vary depending on their location and the skill of each individual translator. In many cases, this lead to translations that left out parts of the “true doctrines” and portrayed a more Ojibway perspective in their text. Despite the pressure to Christianize, Ojibway peoples were able to integrate new teachings with old beliefs.

This volume represents the complexity of the interactions between the Ojibway and the new European settlers populating this area, especially with regard to religion and religious practices. The hymns within the pages of Rev. Jacob’s hymnbook facilitated the spread of the new Christian faith. Nonetheless, his hymnbook still epitomizes aspects of the culture of the Ojibway people such as their stories and their ideas as well as the intricacies of the Ojibway language itself. This text therefore reflects the merging of the culture and religious beliefs of two peoples.

This volume is also an important historical artifact. It is small and therefore portable. Although it is well over one hundred years old – it is remarkably well preserved, with only minute evidence of deterioration, such as the yellowing of its pages. Its superb condition may hint at either an exceptional quality of storage or how rarely the volume itself was used. The fact that it is a third edition suggests the hymnbook’s level of popularity and its influence during the nineteenth century.