Isaac Bearfoot’s 19th century letters demonstrate how English literacy was promulgated throughout indigenous communities by religious missionary organizations such as the Anglican Church. Bearfoot was born a member of a Mohawk community in Grand River, and later attended Huron College in the 1870s where he was ordained in 1878. He would go on to serve as a Missionary cleric in several Haudenosaunee and Anishinabek communities up to 1888. These included appointments to Point Edward, Walpole Island, Pelee Island, Dresden and the communities of Kanyengah, Cayuga, Delaware, and Tuscarora.

Bearfoot himself is evidence of a sustained development of English literacy among the Haudenosaunee of Upper Canada through the 1800s, as his beautiful handwriting can attest to. Much like the description in Sacred Feathers of Methodist preacher, Peter Jones¹, Bearfoot utilized similar talents as a bilingual and bicultural clergyman, to assist the Diocese of Huron in their missionary efforts. The following letters written by Bearfoot illustrate some of the financial difficulties that came with such appointments. As the Anglican faith was quickly gaining momentum in Upper Canada, often the coffers of the Huron Diocese could not maintain consistent payment for its multiple missionary efforts.²

As the third letter illustrates, however, it would seem Bearfoot’s affiliation with English literacy and the Anglican Church, though strained at times, proved beneficial in a time of shared cultural space. Though important to note that this is not the end of a series of correspondences, it is indicative of the fact that Bearfoot was comfortably compensated for his missionary efforts in the Grand River area, having been given residence and a considerable allowance, and would live the rest of his life in this region.

The Rev. I. Bearfoot

done (at once) to relieve me of my present

am now reduced down to my last

five dollar note: am obliged to

let my housekeeper go, and submit

to others grievous inconveniences.

It does seem so hard that of over

to extreme measures; but matters are

desperate and what am I to do?

I wish you would speak to the Bp.

and see what can be done and

you would oblige me very much

I herewith send you

for the information of the Executive Committee, a

the Dresden Congregation for services rendered

as Incumbent. Will you kindly present it at

their next meeting in March.

I also herewith respectfully apply to

the Committee for a special grant- to prevent

a total loss of the said Balance – Will you

present, also, this application at the same

P.S. I received from you, in November, an ad-

grant from the Mission Fund, thus leaving me over

To the Executive Committee

of the Diocese of Huron.

Company” have employed me

as Assistant Missionary among

the “Six Nations”: and towards

my stipend they have given

a residence and a grant

of Six hundred dollars per

annum.  According to the

Canon, I am entitled to receive

Eight- hundred dollars and a

residence from the first day of

July last – having then completed

ten years of active service in

Priests’ orders – I hereby there-

fore respectfully apply to you

for a grant of two hun-

to date from the said first

day of July last past – to

have approved of this applica-

I have the honour to be, 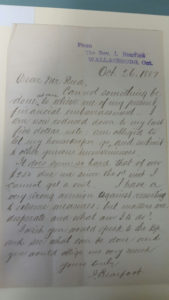 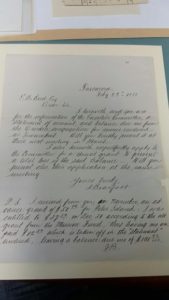 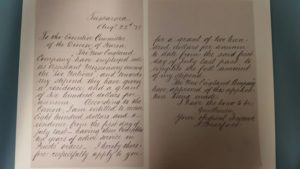