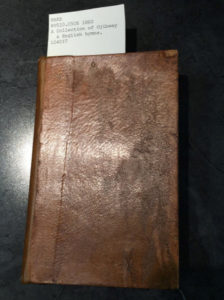 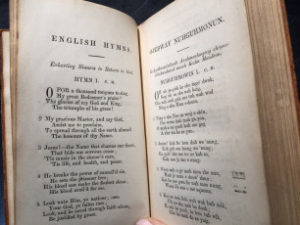 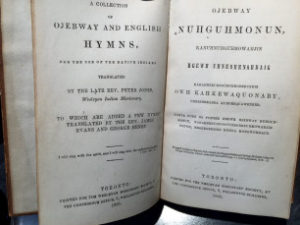 Peter Jones, the son of a Welsh loyalist and Mississauga Ojibwe woman, used his bilingual skills (Ojibwe and English) to effectively preach Christianity among his people. He rose to prominence in North America and Europe, being both a devout Methodist preacher and Ojibwe leader, and spent much of his life helping fellow Ojibwe assimilate into settler culture. For these reasons, Jones is often viewed as a crucial element in bridging the Ojibwe of Southern Ontario with the European Methodist culture that was steadily encroaching on their borders.  Jones translated many Christian texts which were published in the late 1820s and 1830s in New York and Toronto. This collection of hymns in both English and Ojibwe translations is titled: A Collection of Ojibway and English hymns for the use of the native Indians / translated by Peter Jones. To which are added a few hymns translated by James Evans and George Henry. In this collection, Jones begins his book by supplying the readers with a page titled, “Key to the Sounds of the Words in the Ojibway”. This specific page gives the readers a guide to the sound differences of vowels, making it accessible to both English and Indigenous readers. Each hymn and poem within the hymnal is translated to both English and Ojibwe languages, each with its own title page. The index included at the back of the book is offered in both languages as well, making it easy for the reader to quickly turn to the hymn they wish to read. The hymns are focused on Christian religious practice and values. Almost all of the hymns include reference to God, Jesus and commitment to the faith as main themes.

The copy of the book in the Huron Rare Books Collection has a brown leather cover, possibly a later rebinding. . It is rather small and light, which suggests it was created for personal use. There is some aging at the edges of the pages, and the pages have been well used, but overall the hymnal is well preserved.

A Collection of Ojibway & English Poems was published in 1860 by the Wesleyan Missionary Society by the Conference Office in Toronto.  The Wesleyan Missionary Society was a branch of the English Wesleyan Mission, a British Methodist missionary society that had missions all over the world.  The copy of this book held in the Huron Rare Book Collection was owned by Susanna McCue at Snake Island in Lake Simcoe.  There is no information on who Susanna McCue was, but it is likely that she was a missionary working with the Ojibwe.  The small size, plain cover, and well-used pages suggest that this book was used and referenced frequently by the owner.  The book seems to have had the spine rebound, but it is unclear when this happened, or under whose ownership.  It is also unclear when and how the book came to be in the Huron Rare Book Collection, but it is likely that it was donated to the library because it is a religious book, and Huron has a well-known theology program and religious book collection.  The scarcity of information on the book’s history suggests that this book was not considered to be of great importance.

The Collection of Ojibway and English Hymns provides a great deal of importance and insight into the history of Indigenous and Europeans interaction in Southern Ontario. One of the key insights this book provides is how Ojibwe culture in Southern Ontario was preserved in a time where many Native cultures were threatened by Euro-Canadian settlement. Yet it is important to note how this was done. In order to combat the cultural erosion that colonialism brought to the Ojibwe, Peter Jones encouraged the Ojibwe to become more European: to learn English and convert to Christianity and farming. As such, an interesting paradox arose in which we see that some Indigenous groups believed they could preserve their culture through colonial methods.

The book also presents an interesting display of a new culture emerging. When thinking of this sort of mixing, the Metis often come to mind but it needs to be addressed that this sort of inter-mingling occurred among many different European and Indigenous groups. Peter Jones himself was part Ojibwe and part British (Welsh). Jones’ book is a direct reflection of both himself and the emerging cultural group he was a part of as. The book itself, as part British and part Ojibwe, reflects this cultural and religious syncretism.