The Booke of Common Prayer (London: Christopher Barker, 1586?)
Quarto in 8s (4º in 8s)
STC 16311.4
ESTC lists 2 copies (Oxford, Pembroke College and University of Texas at Austin (Harry Ransom Center).
1 column, black letter
C of sig. C1 is under e of water. See note in ESTC.
ESTC collation: Signatures: &8 2&6 A-2I8 2k4
Huron’s copy matches the above except for the following: &1-8, 2&1 and T8r missing. Titlepage has been replaced with a later version, likely from a Barker edition of 1589 or later.
Title page within ornamental border in black and red (McKerrow & Ferguson 165a). See “Forensics” section in post below for more details.
Tears to leaves X3, 2B5, 2F1, 2F8.

Bound with The Whole Booke of Psalmes (London: John Day, 1583)
Quarto in 8s (4º in 8s)
STC 2466.5
ESTC lists 5 copies (St. Andrews, U. of Chicago, U of Illinois, U Penn VanPelt Dietrich, Zion Research Library).
1 column, black letter
The “i” of sig. E1 under “r” of Embrace. See note in ESTC.
ESTC collation: Signatures: A4 B-Y8 2A-2F8 2G4
Huron copy matches the above except for the following: F1, F8, 2F1 and the G and H gatherings are missing and the final section beginning “A Forme of Prayer to be used in Private Houses” (2F4-8, 2G4) is also missing but here has been replaced with leaves from a different edition.
Title page within ornamental border in black and red (McKerrow & Ferguson 113). 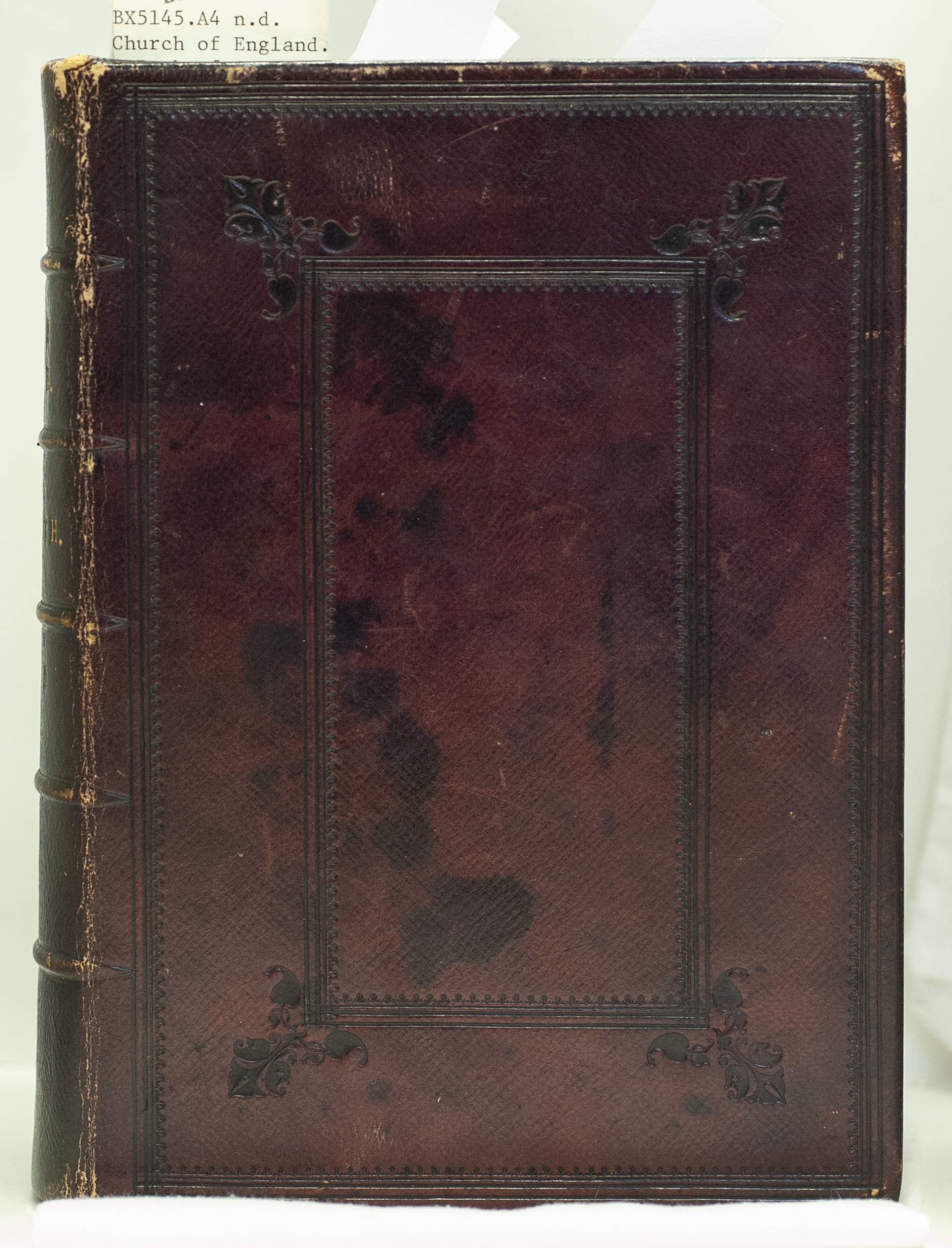 The Book of Common Prayer (BCP for short) and the Metrical Psalms were two of the most popular of early English books, seeing hundreds of editions printed throughout the sixteenth and seventeenth centuries. Shown above is Huron’s copy of the two works bound as one. The Whole Booke of Psalmes collected into Englishe Metre has the year 1583 at the bottom of the title page, but The Booke of Common Prayer has no date on its title page. This is not uncommon in books of this period, but it can prove challenging for dating them.

It is not surprising to find these two books bound together. Both were regularly used in English church services from the 1540s onward. In fact, it is quite common to find copies of both works bound together or with Bibles from the period, as seen in Huron’s 1638 and 1732 editions of the BCP.

The Book of Common Prayer (BCP) has been the core liturgy, or guide to worship for the Church of England, now the Anglican Church, since its creation by Thomas Cranmer in 1549. Revised and modified over the century since its inception, the BCP would see significant changes in the editions of 1552, 1559, 1604, and 1662.[1]
Huron’s copy captures this history of revision since a later, seventeenth-century owner has annotated the copy with manuscript notes to reflect the changes made to the important edition of 1662. What we have then is an edition of the late sixteenth century modified for a Vicar working in an English parish church a century later. 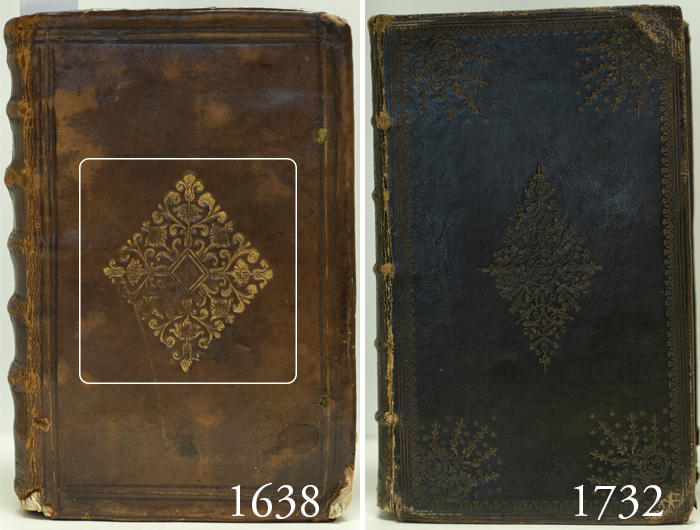 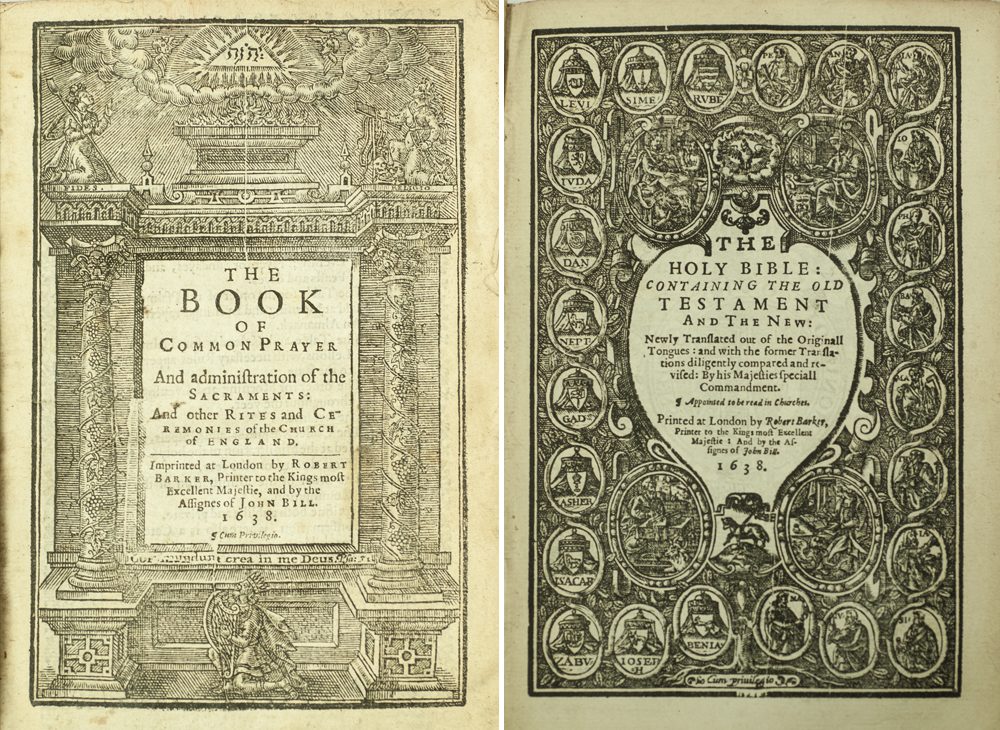 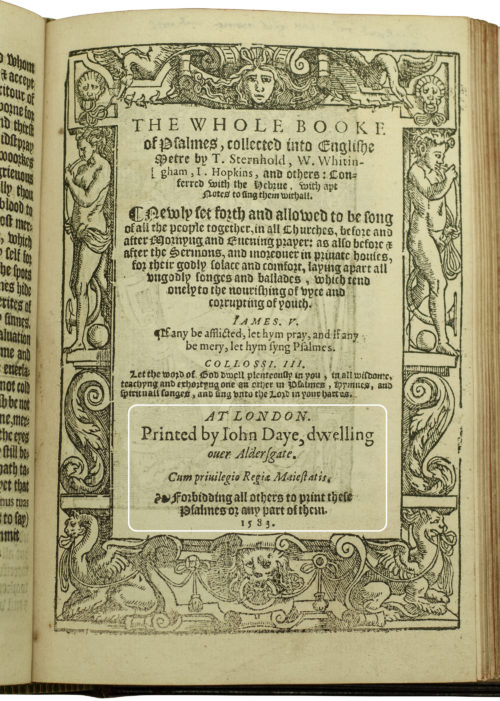 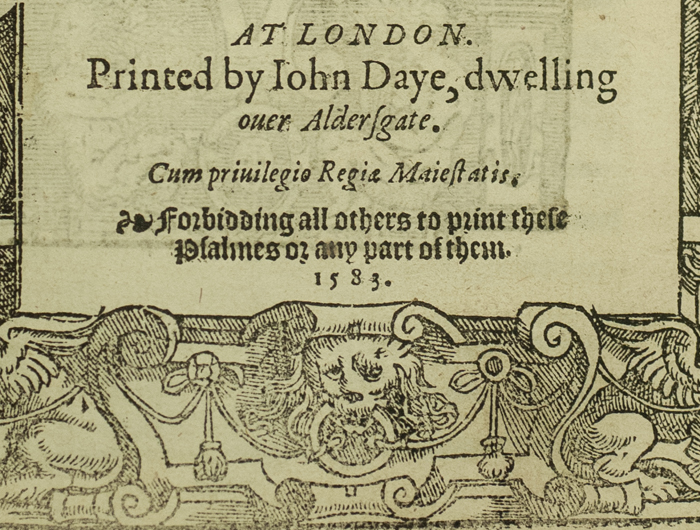 Similar to The Book of Common Prayer, the Metrical Psalms (i.e. the Psalms put to music) composed by Thomas Sternhold and John Hopkins quickly became a standard text of English Church worship. Started in the late 1540s, and augmented in the decades to follow, the metrical psalms witnessed hundreds of editions in the century to follow. In the early years of Elizabeth’s reign, printer John Day acquired the patent (i.e. exclusive rights) to print this work, and two decades later, he was still overseeing its printing. On the title-page, shown here, we not only get “AT LONDON Printed by Iohn Daye, dwelling ouer Aldersgate” but also a warning “forbidding all others to print these psalmes.” Between these two statements is the official, common latin statement of protection. Cum priveligio Regia Maiestatis is, as Shef Rogers has recently shown, a form of royal protection but not a royal endorsement. We might say that the statement is an offer of privilege from the Crown for a particular stationer to print a particular work.[2]

As with all sixteenth-century imprints, these two books were produced by hand, with each piece of metal type set piece by piece. Once several pages of type were set, they would be inked so the printing of the sheets could begin. This action was repeated until all of the pages of the book were printed. Once the sheets dried, they were then folded, cut, sewn, and in most cases, bound.[3] 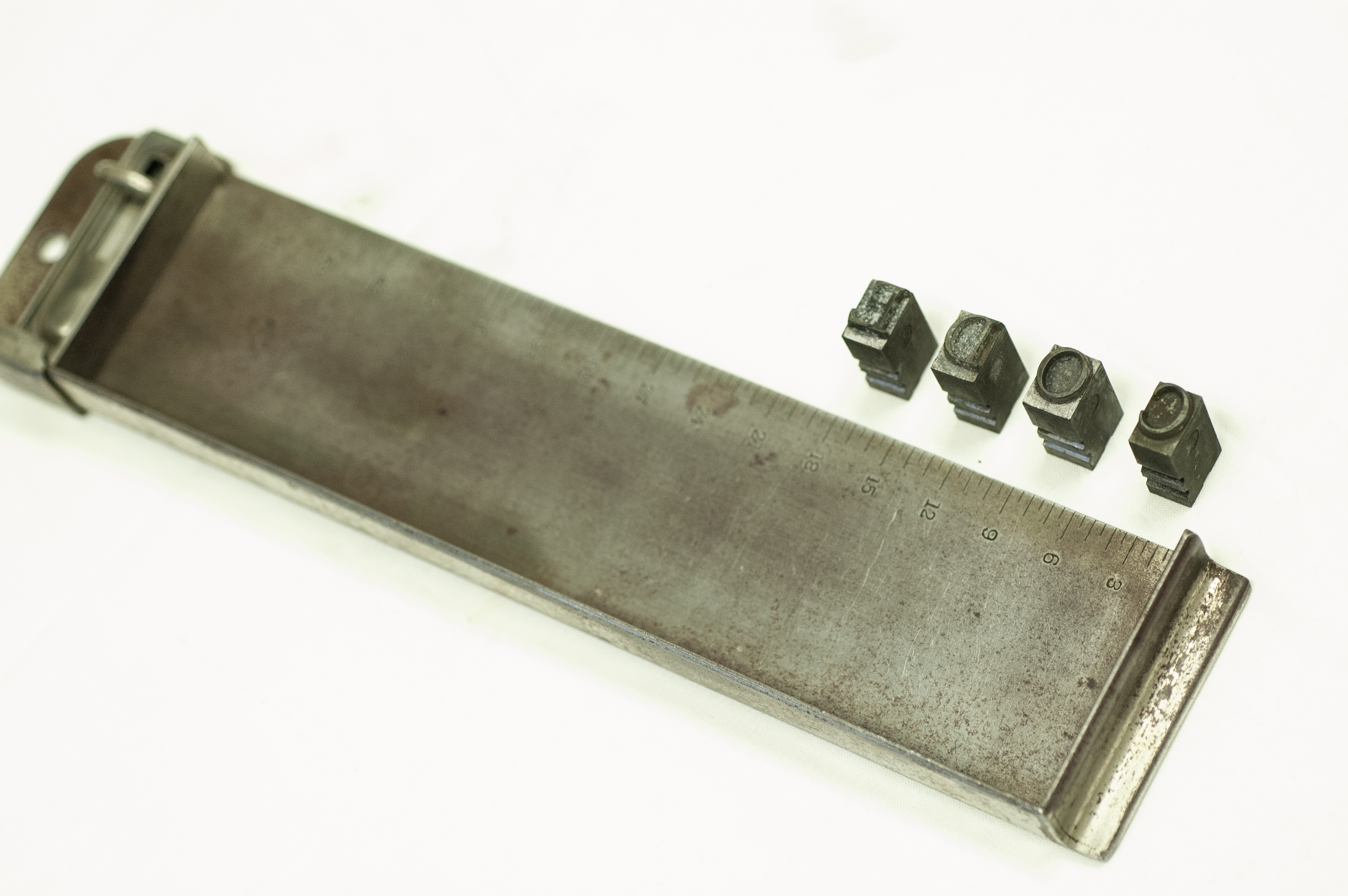 Huron’s copy of the BCP is primarily in black letter, although italic and roman letterforms are arranged for emphasis throughout. A good example of this typographical diversity is found at the start of the section entitled The Order for Evening Prayers throughout the year (not shown here). The first four lines of the verso (or page on the left) not only require the compositor to use four different sizes of type, but also four different kinds.  Add to this the use of the large decorative, woodcut initial about 25 lines down and we begin to get some sense of the work required to print a single page of this 532-page book.

The printing of the Psalms was no less challenging.  Not only did the compositors working in Day’s establishment have to set type for hundreds of pages of texts, but they also had to print music too. The start of Psalm 59, shown here, offers a glimpse of the work required for this job: different sized fonts, specially designed bars of music, woodcut initials, and more. 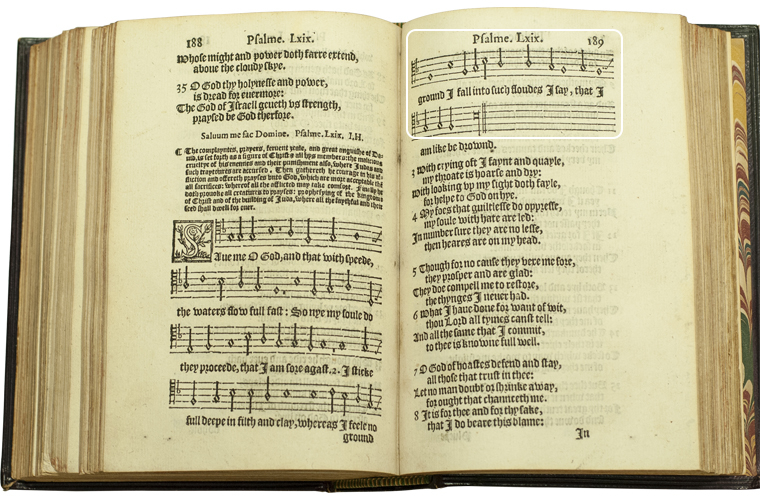 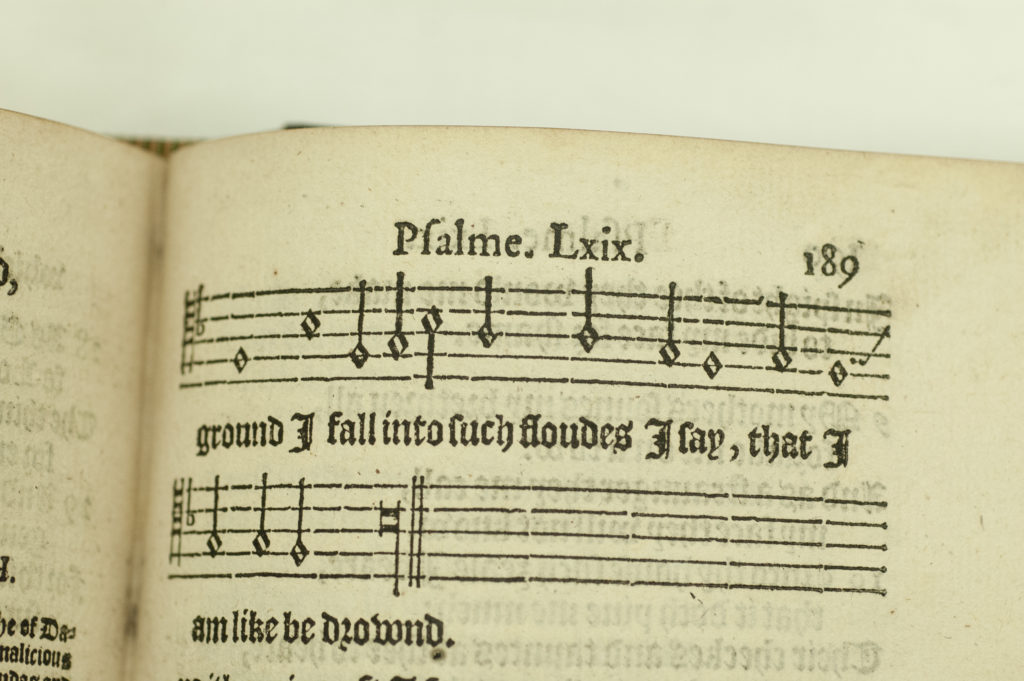 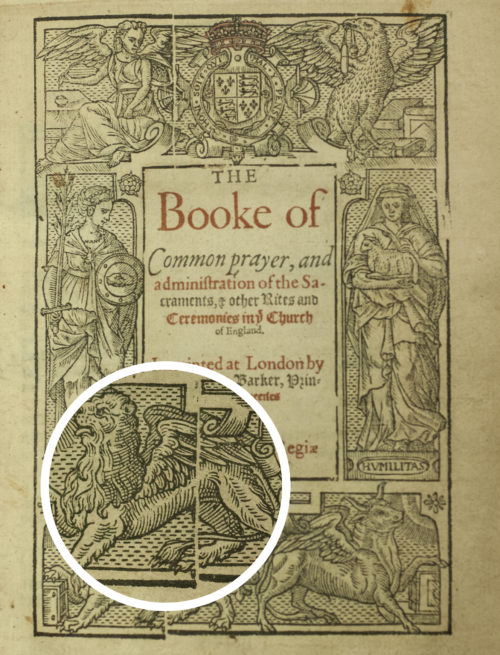 As mentioned above, Huron’s copy of the BCP is undated, and while inscriptions inside the book would suggest that it is a work of 1583, the internal evidence suggests the title page is likely a later addition and neither it or the larger work was printed in 1583.

A search of Early English Books Online (EEBO) shows examples of the BCP with the same title page from 1582 (STC16309.5) and numerous other Christopher Barker imprints use the same title page between 1579 and 1588.[4] While all of these examples have a small crack in the woodblock border, it is not until 1589 that we see examples that have a more significant crack that matches the Huron copy. Indeed, both STC 10129 (1589) and STC16523.3 (1590) offer good examples of this later evidence of wear. This would suggest then that the copy of the BCP is dated 1589 or later, right?  Well, not quite. When we move past the title page, we discover that several leaves are missing, but that the main text block matches an earlier edition produced around 1586. Not only does our copy match the description in the STC, namely that this is a single column, black letter quarto, but the C of signature C1 is under the e of water. Therefore, what we likely have is a BCP of ca. 1586 (STC16311.4) with an unidentified title page of 1589 or 1590. Strange, but why?

One possible answer comes at the end of the book. Here we find several leaves from a different edition used to complete Day’s 1583 edition of the Psalms. In other words, at some point someone decided to “complete” this copy by adding missing leaves at both the front and back of the book.  Did this happen before it reached the hands of Thomas Leigh in the 1670s, or was this restorative work carried out when Hayday had the copy bound in goatskin?  Either way, the bibliographical evidence reminds us of the later interventions often found in early modern books.

The Huron University College copy is bound in nineteenth-century burgundy, blind-tooled goatskin with matching burgundy marbled endpapers and pastedowns and foredges in gilt. The title “COMMON PRAYER”, the reign, “ELIZABETH”, and the date, “1583” are tooled in gold in compartments 2 to 4 on a spine of six compartments and the endbands include a mix of alternating green, gold and beige thread. The verso of the marbled front endpaper has “Bound by Hayday” stamped at the foot of the page, a reference to the respected London bookbinder, James Hayday (1796-1872).  Whether this copy was bound by Hayday or by William Mansell, who continued to use the Hayday name, is uncertain, but it is a product of the Hayday establishment.[5] 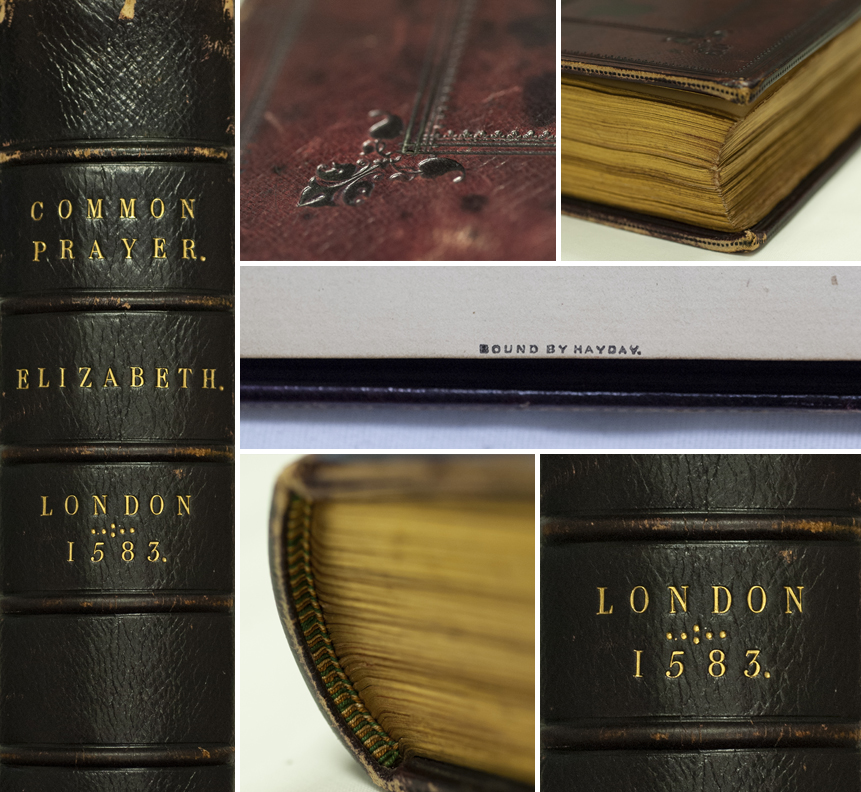 Leigh, Thomas (1633 or 1634-1687). The Huron copy was previously owned by Thomas Leigh, whose name appears at the head of the verso of the second plain front endpaper. The inscription begins, “Tho.[mas] Leigh Vicar de BpStortford Pret[ium] 2s 6d.”

Leigh was Schoolmaster of Bishop Stortford School from 1662-1664 and the vicar from 1680-1687. See The Clergy of the Church of England Database

Based on this ownership inscription, we can deduce that this copy was purchased for 2 shillings 6 pence at some point between 1680 and 1687. Leigh has also added additional notes regarding the prayers added to the 1662 edition of the BCP (see below under handwritten notes).

1. Simes, John Thomas. The armorial bookplate of John Thomas Simes (1835) (Franks, 26951) with motto DEO NON FORTUNA has been cut out and pasted on the verso of first front endpaper. 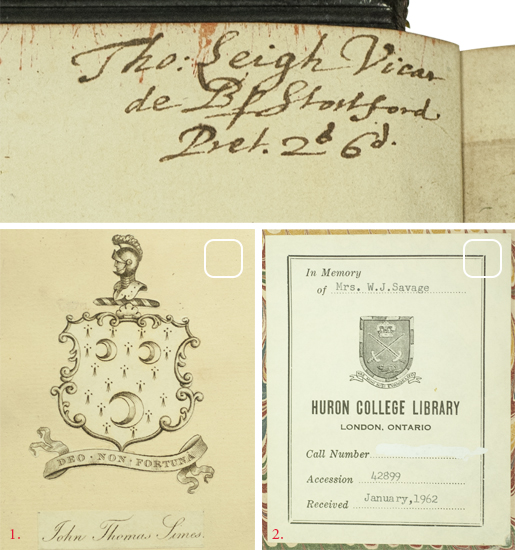 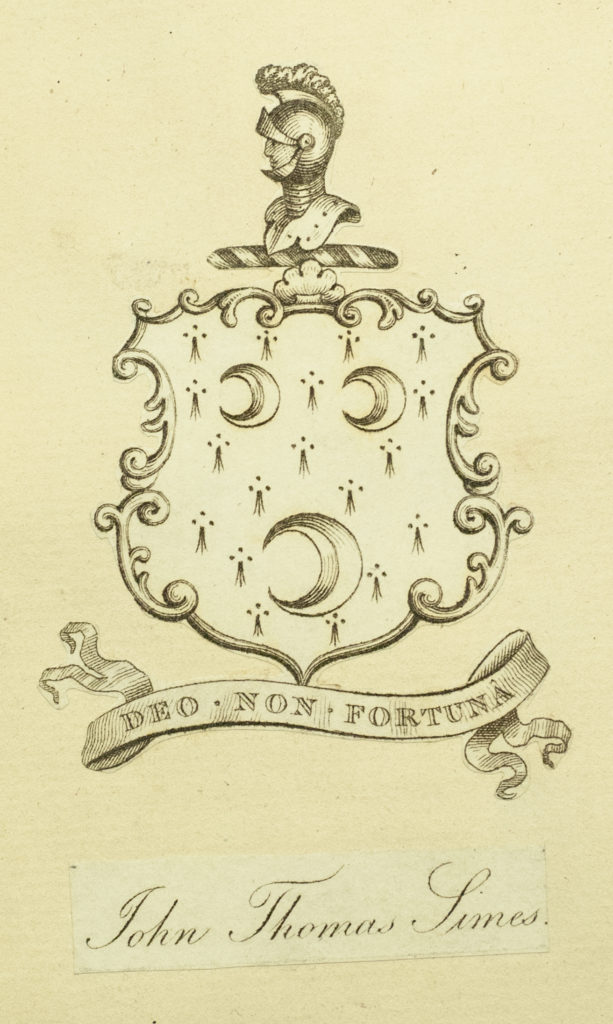 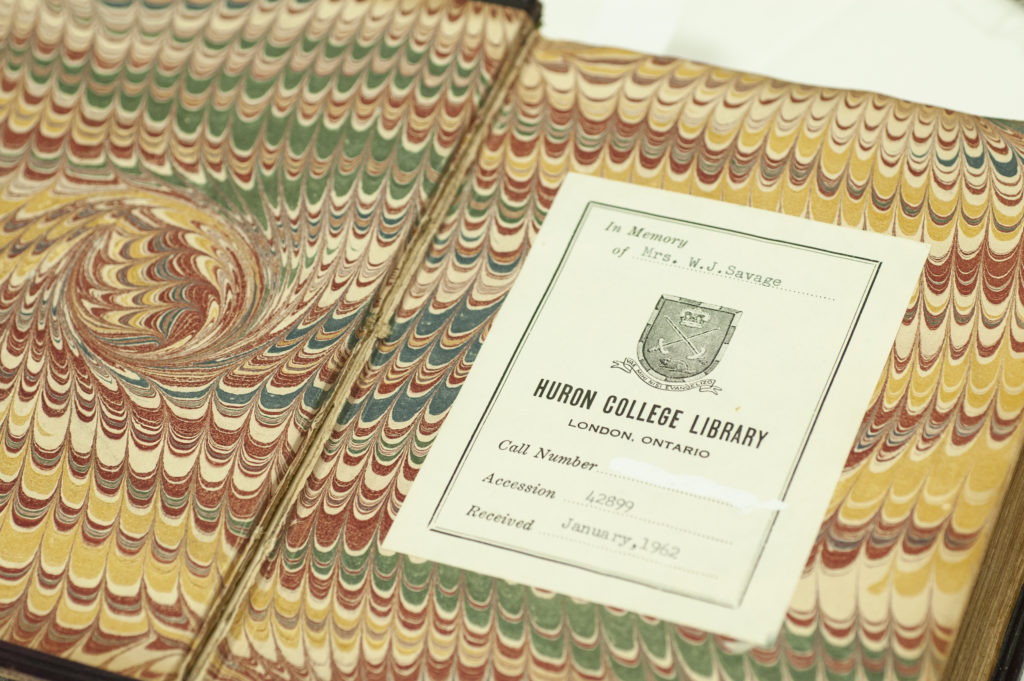 The Huron copy includes notes written by Thomas Leigh (see above) on the blank leaf before the title page and in several pages throughout.  All annotations take the form of updates, i.e. additions and omissions from the 1662 edition of the Book of Common Prayer added to or removed from this sixteenth-century edition. See A7r, B7r, C5v, P8r, Q7v, R2v, R4r, S5v, S7r, T1r.

A penciled inscription on the verso of the first endpaper shows evidence of an earlier shelfmark, and there are additional penciled notes recording the missing leaves on the first blank endpaper. 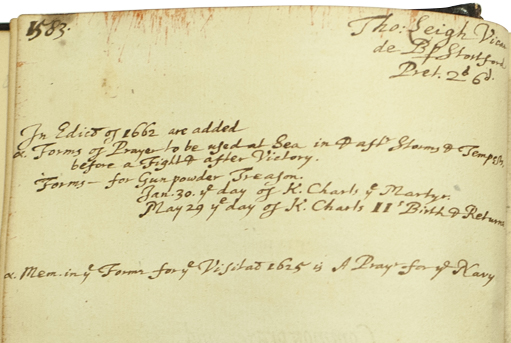 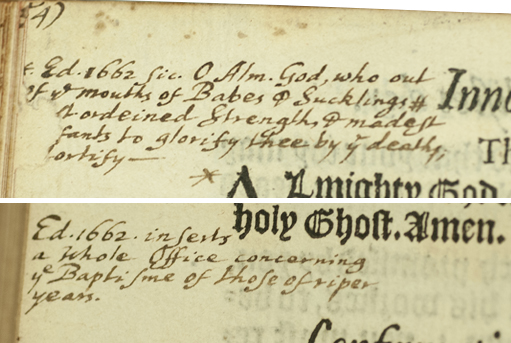 There may be updates and/or ammendments to this post in the future. We invite your comments down below.