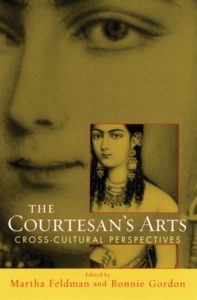 “The Indian courtesan pervades precolonial art, literature, mythology, texts on rituals, polity, pleasure, and law books in the three major religions founded on Indian soil. Yet as much as she captivates, she also eludes. Why? Because her actions, her character, her mystique, are relayed to us by outsiders to her world, or to traditional India. Her own voice has remained faint until fairly modern times. This essay introduces different voices that describe the Indian courtesan over a vast stretch of history. What becomes clear is that two options for power were open to the precolonial Indian woman: that of the sexually liberated and educated courtesan or the pure, sexually controlled, uneducated wife.”