Some of our readers may be unfamiliar with several of the terms regularly used in texts about devadasis and tawaifs. To assist you, we have put together a glossary of these common terms.

It is important to note that in all cultures, a single term may have multiple meanings, and those meanings are always evolving.  This glossary is intended only to assist readers in understanding and interpreting relevant texts, not to imply a stagnant or universal single meaning of each term.

Literally translated as ‘servant of god,’ the term “devadasi” refers to female dancers and singers who are generally, though not always, members of hereditary performing families in South India. Although devadasis have historically come from a range of castes, in the early part of the 20th century, these families organized themselves for political purposes into a caste category that they named isai vellala, and this is how they tend to identify themselves in present-day India. While devadasis have a centuries-old history in South India, discourses around these performing women have shifted throughout history, and, consequently, the representation of them is best understood within specific contexts. For instance, while some devadasis were linked to temples through various rituals, others have performed their art in more courtly and secular forums.

(The term “devadasi” has more recently been used to designate the ‘basavis’ or the dasis associated with the goddess Yellamma, though the religious practices and social meanings surrounding the basavis are considerably different from those attached to the more established devadasis of South India. Concerned as it is with collecting scholarship and preserving knowledge about India’s traditional performing women, this website does not address the conditions and issues related to the basavi community of contemporary India.)

The term “tawaif” is not as easily translated as “devadasi,” since there is a good deal of scholarly disagreement about the origins of the word. Generally, however, this term refers to performing women – singers and dancers – in North India, many of whom were attached to courtly cultures but, following the disintegration of the courts after the 1857 Mutiny, some went on to accommodate the new economy and formed their own salons, which were called “kothas.”

The word “nautch,” as in “nautch girl,” is a British rendition of the Hindi noun “naach,” which means “dance.” Rather than differentiating between the many categories that the traditional performing women of India themselves and the larger Indian community recognized, British imperialist discourse collapsed the boundaries between them and infantilized them by describing them universally as ‘girls.’ The British also used the word “nautch” to describe the performances of these women; they would, for example, often state that they had attended a “nautch.”

A french term for a devadasi or dancing girl. According to Joep Bor, travel writer Pierre Sommerat (1748-1814) was probably the first to change the Portuguese term “bailadeira” to the French form “bayadère:” his book Voyage aux Indes orientales et à la Chine (1782) was so influential that many 19th-century Western authors thought “bayadère” was the Hindi word. During the British colonization of India, devadasi characters—who, like much of India’s cultural phenomena, were exoticized, demonized, and otherwise stereotyped to bolster Britain’s supposed civility—were popularly written about in poems (such as Johann Wolfgang von Goethe’s “The God and the Bayadère”), ballets (such as Marius Petipa’s “La Bayadère”) and travel memoirs (such as Anna Leonowens’s “Life and Travel in India”).

“Bharatanatyam is the name given to a courtly form of dance that was also practiced in some temples in South India. Prior to the 1930s, the art was the preserve of a professional community of artists known in the Tamil-speaking regions as melakkarar (“artists of a troupe or guild”). These included women (called devadasis) who performed dance and their male musicians and dance-masters (nattuvanars). In the eighteenth and nineteenth centuries, these artists performed dance and music at a range of sites – courts, salons of the landed elites, marriages, and temples, particularly during calendrical festivals. The women in these communities were in many ways equivalent to courtesans, and usually did not have conventional marriages. Instead, they had relations with elite men, and were often the life-long mistresses or second wives of these men.

By the end of the nineteenth century, this lifestyle came under scrutiny by Indian elites, colonial administrators, and others, and by the middle of the twentieth century, a number of legal interventions criminalized the culture of the devadasis. But the dance itself was incorporated into the world of emergent Indian nationalism. In order for the dance to become “respectable” enough for non-devadasi women to perform it, it had to be purged of much of its content and its relation to devadasi communities. This task was accomplished by a number of women in the 1930s and 1940s, and the dance had become institutionalized with a completely new pedagogy in Madras city by the end of this period. It became a prominent mark of middle class identity in urban India, and also was deployed as a symbol of India’s civilizational accomplishments.” 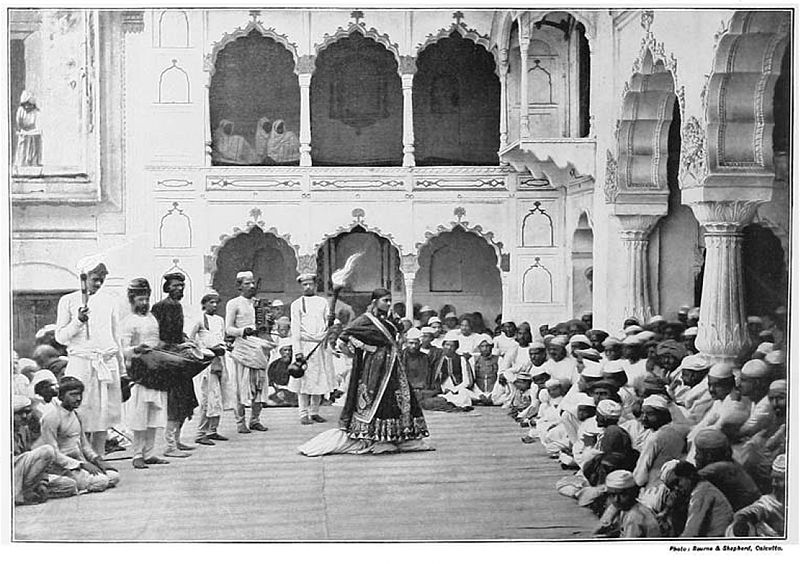 Photograph of a Nautch Dancer Performing in a Kotha (c. 1899)

Kotha and Kothi (adapted from chandrakantha.com)

“Kotha” literally refers to a very large house or mansion, especially one made with bricks or stone. The term kotha is often used to refer to a house where tawaifs live and work. “Kotha culture” refers to the culture localized in the kotha, including the tawaifs, poets, artists, and musicians who performed, as well as their patrons.

“Kothi” architecturally means the same thing as kotha: a very large house or mansion. However, “kothi” connotes a bank or a royal house, rather than a tawaif house.

Readers of our bibliography will often find references to “the Indian Nationalist Movement.” Like all bringers of social change, it may be better understood as a series of interconnected movements, consisting of a diverse array of people, ideologies, methods, and organizations.

Readers should be aware that, while many groups aimed to build a national identity, this vision does not mean all aspects of the Indian Nationalist Movements were unified or in agreement. Like all mass social movements, disagreements between social groups and individuals about goals and the means to achieve those goals abounded.

The move for Indian independence is connected with the social rejection and subsequent outlawing of devadasi and tawaif practices. By the late 19th century, the Victorian British perception of tawaifs and devadasis summarized them as immoral, diseased, fallen women. One strategy of the Indian Independence movement was the Indian push for adherence to British customs and ideologies, a move that would supposedly encourage the British to view Indians as civilized. Devadasis and tawaifs therefore found themselves rejected by both the British colonials as well as many other Indians.